The Wharram World circles the globe. Wharram catamarans have been built and are sailing in all the World's oceans and can be found in far away ports and anchorages.

With over 10,000 sets of Plans sold since the 1960s this is not surprising. Many of the builders and sailors of Wharram catamarans are now writing blogs about their exploits and publishing films of their boats sailing. Many have done amazing things with their boats. Some are offering their boats for charter.

This information is gathered here to share with people new to the Wharram World. Learn about what others have done, get inspired and start your own life of adventure on the sea!

If you and your Wharram catamaran would like to feature on this page, please get in touch. Share your builder's blog, photos of your newly launched boat, tales of adventure, a charter, an upcoming expedition, a testimonial, anything goes. Contact us and share your story with the Wharram community. 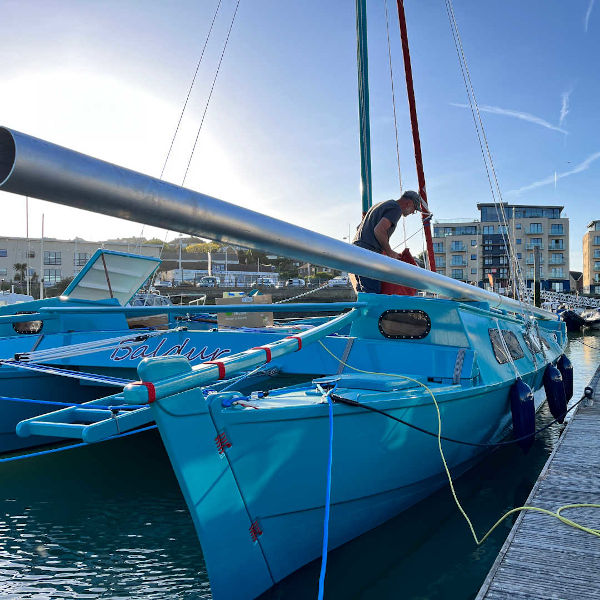 Your Wharram catamaran helps you to connect..

The best part of our Greek adventure has been the people; the meetings; the new friends.. just wonderful. And having a Wharram catamaran really does a lot when it comes to meeting new people. Locals, fishermen, tourists... all ages.... they all get attracted to the boat. They all see it as a traditional boat, and they have so many questions. We have also had lots of old seamen and fishermen on the boat giving advice and tips on local weather and harbours. Truly amazing. We have learned a lot from these very skilled and experienced seafarers. And also here our Wharram helps; they see it as a proper seagoing ship.

I was prompted to email you and let you know what a wonderful craft my Melanesia 16 has proven to be. Some of my adventures have been a little on the edge of a small canoe's capability but she hasn't let me down.

Building Kiski, a school project to build a Melanesia

I am a freshman at The Kiski School, an all boys private boarding school located in Pennsylvania. In my Survival Arts class this semester, we spent nearly a month piecing together the Melanesian Outrigger Canoe. The plans for the canoe were very easy to follow. The pieces all fit very well with one another to the point where we had no issues putting them together. Each of us had an enjoyable time learning how to build a boat.

Work began in July 2013 with the delivery of the plywood and timber: Okoume marine plywood and two large planks of Mahogany. We worked on Neuro during the weekends and during our free time after work on weekdays. We only had few machinery so we did most of the work by hand. It was the most satisfying experience to see Neuro take shape as we progressed. Don Brazier, Wharram agent in New Zealand and owner/builder of a beautiful 41 foot Narai Mk IV, has been collecting accounts from many Wharram sailors who have experienced severe weather at sea. He himself has made a number of voyages in the Pacific and encountered severe weather, in which he deployed drogue and parachute.

The first Tiki 46 was built by Ann and Neville Clement, two experienced single-handed ocean sailors. Upon completion they crossed the Atlantic and now make a yearly migration up and down the USA East coast. Ann has written regular updates on their travels, interesting experiences and improvements to their boat.

The Katipo Voyage - Pacific Voyage On A Narai Mk4

This is an account of Don's latest voyage in the Pacific: "It was a wild, rough night but Katipo’s bows rose to the large, steep phosphorescent capped waves with ease. It was like sitting on a roller coaster at a fun park but if you peered out from behind the shelter of the deck pod you were blasted by cold wind and spray."

"Survival is, as a matter of fact, Mother Ocean's middle name. Her talent for it is baffling: Being among an estimated 700 boats on the hard in Grenada in autumn 2004, she was one of the precious few to come out of the carnage of hurricane Ivan without visible damage, save one solar panel that came off at the height of the storm".

Building And Sailing a Tiki 38 In South Africa

"She had taken me 3 years to build in a warehouse in Durban, South Africa. I have not sailed a large boat single or short handed so it was with some trepidation that I took Dragon on her first cruise in December 2004 to Richards Bay."

"Plenty of water has passed under Dragon's keels since I last wrote to you. In January 2009 Dragon and I left I our home port of Durban, South Africa for New Zealand. We had stops in St Helena, Fernando de Noronho, Forteleza and Grenada. Dragon has proved herself to be a magnificent boat."

The Wharram name is legendary..

Many, many thanks for all you've done for the global sailor's world of sustainable, practical, and beautiful sailing. The Wharram name is, and will remain, legendary.

The ‘Lapita Voyage’ began in the first week of November 2008, when two 38ft double canoes, designed by James Wharram Designs, based on an ancient Polynesian canoe hull-form and built in the Philippines, set out on a 4,000Nm voyage along the island chains of the Philippines, Indonesia, New Guinea and the Solomons.

Their destination was Anuta and Tikopia, two tiny, remote islands at the Eastern end of the Santa Cruz Islands, where the boats arrived in mid March 2009 and were donated to the islanders for their future inter island voyaging.

The ‘Lapita Voyage’ was a major expedition in Experimental Marine Archaeology. It was the first exploration by Ethnic sailing craft of one possible migration route into the Central Pacific. The voyage was made entirely under sail without motors, using traditional Polynesian crab claw sails and steering paddles.

The Polynesian Catamaran Association has been a voluntary club for people interested in the designs of James Wharram since 1967. Due to a direct request from James and Hanneke an archive of all the past PCA publications has now been created, and made available on-line. We hope you enjoy reading all 75 of The Sea People magazines!

Wharram Community On The Web

Respect for the brilliance of a holistic approach in Wharram design..

Hello, the purpose of this email is to express my respect and compliments to James and Hanneke. I have been researching their designs for two years now and I have read many blogs and comments and seen many pictures and videos from builders and sailors. I recently received building plans for a Tiki 26 #454. I bought my first sailing Dinghy when I was 14 years old and now that I am 62 I am still sailing nearly everyday in my Prindle 15 or my Tornado catamaran on the northsea coast at Ter Heijde about 5km north of Hoek van Holland in The Netherlands.

I understand sailing boats and catamarans better than nearly everyone around me and so I understand the many challenges and pitfalls and scams in designs. Reading on the internet I see even experienced builders lack the knowledge to fully respect the brilliance of a holistic approach in design architecture and the high standards of safety in the Wharram designs. Therefore I wish to express my gratitude and respect to James and Hanneke.

In 2004, we ran a storing writing competition. Due to the very high standard of most of the entries submitted, the three finalists were very close in the final scores. Therefore, after much deliberation, we decided to award prizes to all three finalists for their excellent stories. The winner's prize was awarded to the two entries that tied for first place and a 'runner up' prize to the story that scored so close to the winners.

For his outstanding story: 'Stick To The Plans'. Congratulations Tom, you have awarded one of two winner's prizes: a set of Tiki 21 Building Plans and a Winner's Award Certificate signed by Ruth Wharram.

Tom's story 'Stick to the Plans', is set in the 1970's during the 'shakedown' voyage of the Ariki 'Piggy'. Tom and his brother Don, after having completed the building of their boat they set off on a voyage around the world. All goes well and they pick up a hitchhiker, an artist, who wants a ride to their next destination, New Zealand. The voyage to New Zealand is a very dramatic and dangerous leg of their journey. The fact that their fate hangs on a knife edge is revealed through the reactions of their artistic passenger. Read this well-crafted story to share the excitement of this harrowing voyage.

For her outstanding story: 'The Wharram Hunt'. Congratulations Loretta, you have been awarded the other winner's prize: a set of Tiki 21 Building Plans and a Winner's Award Certificate signed by Ruth Wharram.

Loretta's story 'The Wharram Hunt' is a set in a small coastal town on tropical Queensland, Australia. The story is told in an amusing and sensitive way of a woman, who having settled in this town, is invited out for a cruise by a middle-aged friend and his two buddies. She is not overly impressed by the comfortable cruise on the pleasure craft, but is subsequently introduced to a new perspective on boats by another friend who dreams of building a Wharram. The intriguing story then unfolds of the 'hunt' for a glimpse of a finished Wharram so that the dream can be distilled into the purchase of a set of plans and the commencement of the building of a Polynesian catamaran. On the way friendship blossoms into something much deeper as the two go about fulfilling the shared ideal of a life together with a future vision of a sailing life aboard their very own Tangaroa.

The judges have decided to award a further 'Runner Up' prize for the excellent story: 'The Ice Bears And The Bees'. Congratulations Rhisiart, you have been awarded the runner up prize: a set of Melanesia Outrigger Building Plans and an Award Certificate signed by Ruth Wharram.

Rhisiart's story 'The Ice-Bears and the Bees' is a set sometime in the future in a post oil-energy based world. The writer cleverly weaves the story of the coastal sailing community of the future into the story, narrated by an older member of the clan, about a trading voyage to lands where the clan has negotiated treaties for bee hive farms and the trading partners take their share of the harvest to trade for other goods. The tale of a young visionary member of the clan and his revolutionary new craft is woven into the main story. The voyage culminates in the visit to the land of the magical ice bears where the species is being nutured back from extinction under the custodianship of a myserious hermit. The theme of the revitalising of the natural world is symbolised by two events: the birth of a child to the young man's lover in the land of the ice bears and the release of bears back into the lands of the world. A good read.

There were ten entries received for the competition most of a very high standard. Thanks very much to all those that sent in their stories. We will be publishing some of these other entries during the coming weeks.

The judges for this competition were: Ruth Wharram, Steve Goodman (former JWD Webmaster) and Jennifer Weissel (Author of Running Down Rawana).