The Islander 65 'Vaka Motu' was originally designed in 2000 as an island-hopping cargo/passenger/trading vessel. With her 10 ton load carrying ability, she is also a very suitable vessel for expedition work, charter or as a dive boat.

Andy Smith Boatworks are the exclusive builders of the Islander 55 and 65 designs. They can be contacted directly if you are interested in one of these designs, or would like more information. 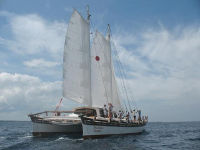 Her interior can be either simple flexispace with cargo holds, keeping the cost of the vessel down, or with various options of cabin accommodation. For strength and lightness the hulls are built in double diagonal plywood, she is totally sheathed in WEST glass/epoxy system.

With a waterline hull beam/length ratio of 12:1 (11:1 deeply loaded), she will move through the water with minimum wave drag at speeds of 1.50 x vWLL plus, giving easy 24 hours averages of 150 to 200 miles (more if driven in ideal sailing conditions).

Good sailing ability is a major part of the design concept. The Islander 65 uses the Wharram Wingsail Schooner Rig, which has proved itself as a simple, but aerodynamically very efficient rig over many years of ocean use on Wharram's own Pahi 63.

Several Charity groups that need simple vessels with low energy input, shallow draft, good sailing speeds and large deck space, for their projects in far flung areas of the world, are planning to use the Islander 65.

I was rather smug about my Pahi 63 design, the 'Spirit of Gaia'. Over 9 years of world sailing, coastal and ocean, she has never let me down, brought me friends and looked after me in gales.

A surprise phone call from the Mariana Islands in the Pacific showed up a fault: lack of 'large' load-carrying ability.

Mau Piailug, a Satawal Islander and venerable figure in Inter Island Proa sailing and Preservation of the ancient Pacific Star and Wave Pattern Navigation systems, sent a message asking whether our Pahi 63 could carry at least 4 one ton fish freezers for inter island trading.

In 1995, in Raiatea, I had met Mau Piailug on our 'Spirit of Gaia' at 'The Great Gathering of Polynesian Double-Hulled Canoes' attended by replica ancient Polynesian craft from Hawaii, Tahiti, Cook Islands and New Zealand. Mau Piailug is the last of the Great Sailing Chiefs of the Pacific History. A request from him had authority.

However, whilst I respect Mau's authority, I found it not possible to change a 17:1 hull beam/length ratio, slim, fast Pahi 63 into a beamier 8 ton+ cargo catamaran.

Another problem we faced in the project was 'island building', i.e. the construction part of the design. The Pahi 63, like all my designs of the last 20 years, is a ply/epoxy/glass laminate construction, easy to get wrong without the right construction attitudes.

We had to create a new design.

My first range of designs (now called our 'Classic Designs') was designed in the 1960s and 70s to be built with simple, non-power tools: hand saws, hammer, planes, chisels, nails and urea formaldehyde/resorcinol glue. They were tough, rugged, buildable anywhere designs. Using this well proven, simple construction method, with epoxy used in a less critical way would give a design able to be built by 'island carpenters'.

Construction method and material influences the styling of a design. Using our 'Classic Building Method' would mean the proposed 8 ton-cargo-carrying catamaran would resemble one of our 'Classic Designs' of the past. This was good, for the style of this design would echo the 'hard line' styling of the Proas of the Marianas not the more curvy softer lines of the ancient Hawaiian craft, which our Pahi craft echoes.

It was also good in that we had a 'sailing model' in our 50ft. Classic Tehini design. I built the original Tehini in the late 1960s. She was our ocean sailing home for 10 years.

Other people have built Tehinis and sailed the oceans (as described in an article by Iain Young, published in 'Multihulls' Sept/Oct '96). For the last few years a Tehini has been trading along the East African coast, Madagascar and Comoro Islands under the redoubtable skipper, Hans Klaar, featured in the July '98 issue of 'Cruising World'. With so much practical experience and sailing data, the new 65ft. 'Islander' or to give it its Pacific name 'Vaka Motu', just 'leapt' off the drawing board, eager to be built and go sailing with a cargo carrying capacity of 8 ton+.

The 'Islander 65' with a waterline hull beam/length ratio of 12:1(11:1 deeply loaded), will move through the water with minimum wave drag at speeds of 1.5 x vWLL plus, giving easy 24 hours averages of 150 to 200 miles (more if driven in ideal sailing conditions).

To drive her at these averages she has the same sail rig as our Pahi 63, the 'Tiki' Soft Wing Sail schooner rig. We know this rig can be handled by two people in gale conditions, reefed with a following wind and gives good sail drive (if cut by a trained sail maker) 37-40° off the apparent wind.

As a young man, Mau Piailug was sailing ocean-going Proas with a Crab Claw Rig. Hans Klaar sails his trading Tehini also with a Crab Claw Rig. We have therefore designed this rig also for the Islander, with less sail area than the Wing Sail Rig because of handling difficulties, but effective in winds of 16 knots upward.

Engine power to choice is delivered from the deck of the 'Islander 65' via the Pacific Rim, 'Long Tail' system. When the boat is sailing, the propeller and shaft tilts out of the sea to avoid drag. When the engine goes wrong, servicing on deck makes it easy to get at!! Engines are necessary to meet schedules, to get in and out of harbours, but they do not inspire me.

What does give me a special pleasure in this design is specifying the use of bamboo and bamboo mats for platform decking. Bamboo is nature's 'high tech fibre'. Modern western man has not yet learnt how to use it. I can see the day when Kevlar and carbon fibre will be elbowed out by the wonder material 'bamboo', a material that is both beautiful in appearance, low in cost and easily renewable.

Enough. The 'Islander 65'/'Vaka Motu' is a practical dream boat that 'works'.