People Of The Sea 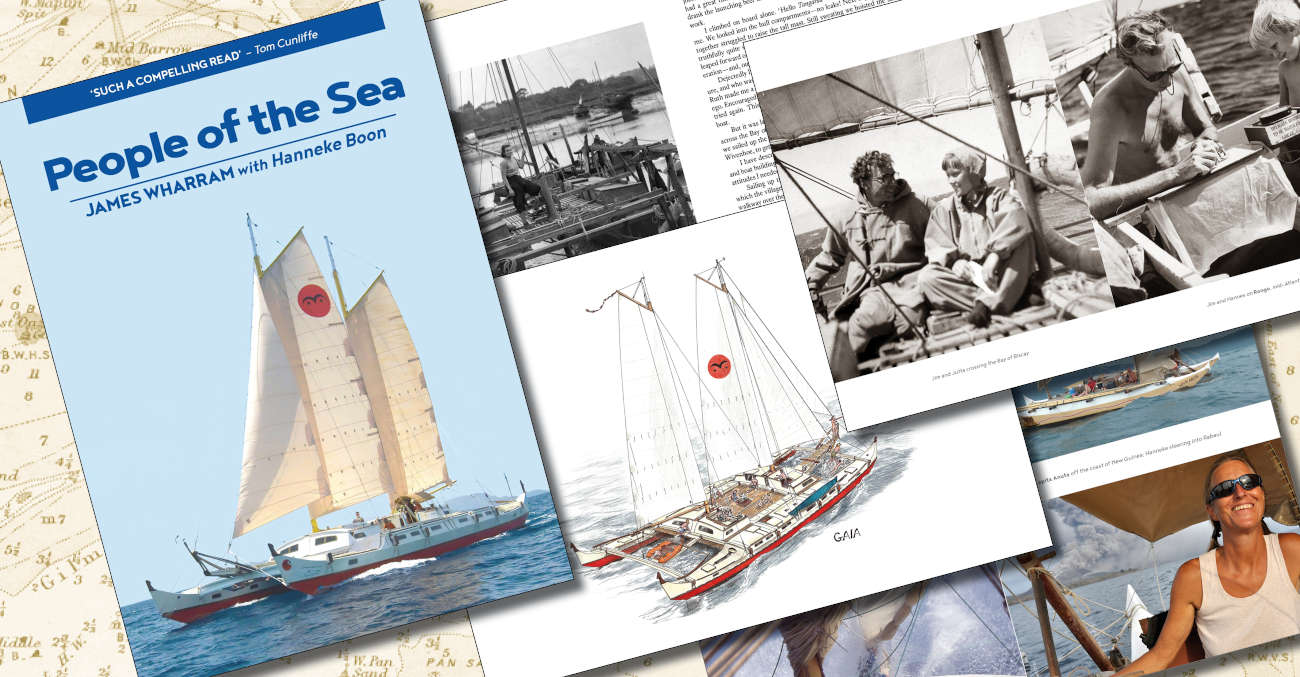 New second edition of the autobiography of James Wharram and Hanneke Boon published November 2021. This more compact edition at lower cost contains all the text and illustrations of the special first edition. An easier size to fit the bookshelf on your boat. A must for all Wharram enthusiasts and other sailors.

After years of writing and many months of preparation James' new book is finally published. We have worked closely with Lodestar Books, the publishers to create a colourful, poetic and informative book. Finally the book that tells the whole story which people who have read 'Two Girls Two Catamarans' have been asking for.

People of the Sea is the life story of iconic catamaran designer James Wharram, from a Wartime childhood in Manchester, to mountaineer, to pioneer catamaran sailor in the 1950s, to designer of modern Polynesian catamarans. It is not just a book about his designs and sailing, but covers many aspects of his philosophy and ideas, on politics, lifestyle, psychology, experimental marine archaeology, boat construction and his relationship with the ocean and its 'people of the sea'- the Polynesians. Interspersed are anecdotes and candid revelations about his own personal tragedies and achievements.

Here is an excerpt from the foreword by well-known yachting writer Tom Cunliffe:

Despite having known James for a very long time, it was only when I read this memoir that I came fully to realise quite how much more than a designer he really is. Half a century on, he remains an independent spirit. His refusal to compromise with the increasing bureaucracy that blights our times has made many a sailor in today's consumer-driven scene ponder on what really matters. The stream of designs from his board has set generations free, but with a set of Wharram plans, you get so much more than the drawings.

Running through the book like the rogue's yarn in a length of three-strand rope is the man's personal philosophy, and that is what makes it such a compelling read. His descriptions of the achievements of vernacular Polynesian navigators are compelling, but his commentary on their lifestyle and how it was torn apart by the representatives of our own is something every westerner should study. Page after page challenges readers to look hard at their own circumstances and do some serious re-evaluation before it's too late.

James Wharram's early rejection of the monogamous mores of the post-war years while still in South Manchester must have required a deal of courage. Such questions remain close to his heart, yet the way he talks about them is tinged not so much with anger at small-minded bigots, but with a wry smile. Perhaps this is the result of the wisdom that comes to a few with advancing years but, joyous to relate, one can wring the chapters inside out and still find no hint of compromise with the establishment.

As we progress through the pages, it is clear that although plagued by seasickness, James became a fine seaman, trained entirely in the school of hard knocks with the ocean as his chief instructor. His designs are criticized regularly by people who have not taken the trouble to hear what he says and thus to discover their subtle excellence. The description of a major storm survived so ably by Spirit of Gaia north of New Zealand while life on board retained its communal harmony is a revelation. The tale of a dead beat north up the Red Sea, a notoriously awful and difficult passage, is told in the almost throwaway manner of the sailor at peace in his own skin and with nothing to prove.

Just finished reading this. Beautiful book, amazing story - not only of the remarkable James, but really a whole group of people (including Hanneke Boon) whose adventurous lives have given us these superb boats and transmitted an ethos through them. Favourite bits of the book? The descriptions of the sailing abilities of Gaia are superb, especially coming after the descriptions of uncomfortable crossings in smaller craft. But maybe my favourite parts are the Welsh and Irish periods of the 70s/80s - the UK of my (early) youth that was so full of experimenting with the alternative ... something that I think has to quite a degree disappeared and that we would be much better off with a bit more of.

People of the Sea is a must-read

I knew very little about James Wharram until, on the recommendation of a friend, I read Two Girls, Two Catamarans, a great read if you like girls and/or catamarans. I agree with Wharram’s philosophy of simplicity and utility - he’s like Moitessier, but with double hulls. When this book was announced, I placed my order right away, and I’m glad I did. It’s not only well-written, but is a nice mix of boatbuilding and seafaring, with just enough of Wharram’s life story, and that of some of his “girls,” to let the reader get to know him, at least on the page. He’s a guy worth knowing, if cruising offshore is your thing; I wish I knew him in person. And if you’re into the modern history of small-boat cruising, People of the Sea is a must-read even if you don’t give a darn about cats. It should be in your library.

I have read this too and its a great book telling the story of a very alternative approach that was very courageous. James Wharram admits to many errors of judgment and his character flaws which destroyed his commune of women some 40 years ago. Its very sad reading as they clearly achieved so much building Tehini - a very inspiring project for me at the time. I think it also shows a certain naivety in his approach to the racing scene for example and the story of why he stopped being called Jimmy was revealing as much of the man as it was of the attitude of those whose patronising treatment he experienced. The establishment that James detested did not need to approve his philosophy or lifestyle in fact because the public in the form of the thousands who built his designs proved that he had inspired people. 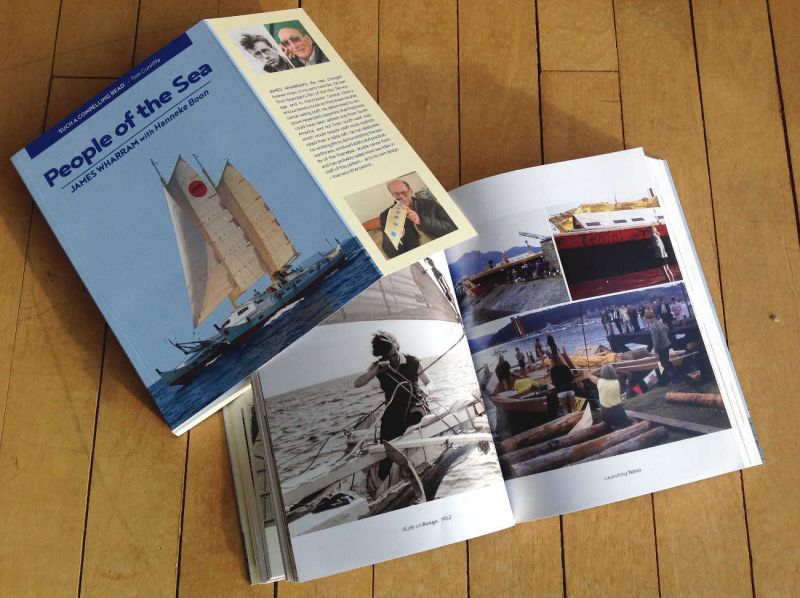 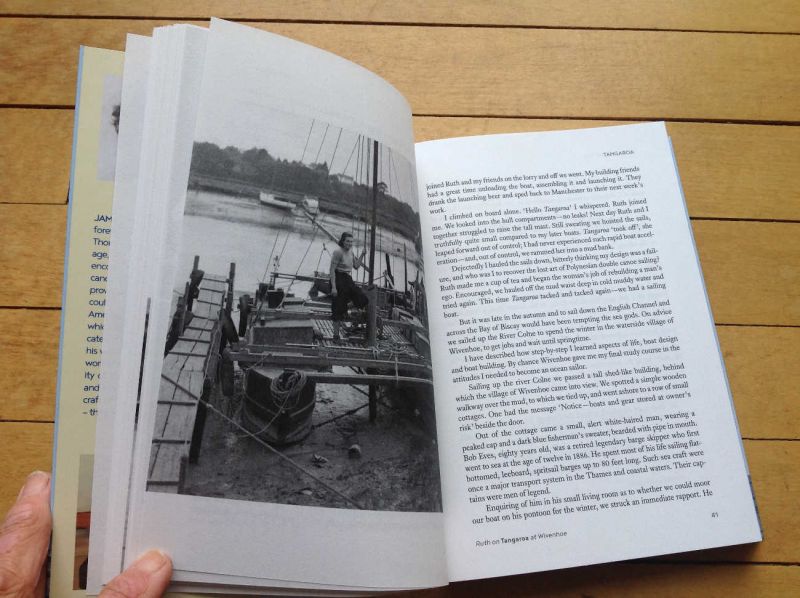